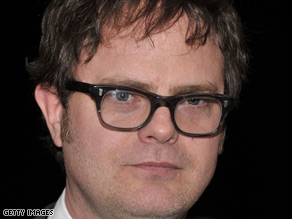 (CNN) Why is Rainn Wilson, “Dwight” on “The Office,” writing a news commentary for CNN? Good question.

It’s a bit strange for me, to say the least; a comic character actor best known for playing weirdos with bad haircuts getting all serious to talk about the persecution of the fellow members of his religious faith.

Dear readers of CNN, I assure you that what I’m writing about is no joking matter or some hoax perpetrated by a paper-sellin’, bear-fearin’, Battlestar-Galactica obsessed beet farmer.

I am a member of the Baha’i faith. What is that, you ask? Well, long story short, it’s an independent world religion that began in the mid-1800s in Iran. Baha’is believe that there is only one God and therefore only one religion.

All of the world’s divine teachers (Jesus, Muhammad, Buddha, Moses, Abraham, Krishna, etc.) bring essentially the same message — one of unity, love and knowledge of God or the divine.

This constantly updated faith of God, Baha’is believe, has been refreshed for this day and age by our founder, Baha’u’llah. There. Nutshell version.

Now, as I mentioned, this all happened in Iran, and needless to say the Muslim authorities did not like the Baha’is very much, accusing them of heresy and apostasy. Tens of thousands were killed in the early years of the faith, and the persecutions have continued off and on for the past 150 years.

Why write about all this now? Well, I’m glad you asked. You see there’s a ‘trial’ going on very soon for seven Baha’i national leaders in Iran.

They’ve been accused of all manner of things including being “spies for Israel,” “insulting religious sanctities” and “propaganda against the Islamic Republic.”

They’ve been held for a year in Evin Prison in Tehran without any access to their lawyer (the Nobel Laureate Shirin Ebadi) and with zero evidence of any of these charges.

When a similar thing happened in 1980, the national leadership of the Iranian Baha’i community disappeared. And this was repeated again in 1981.

In fact, since 1979, more than 200 Baha’is have been killed, holy places and cemeteries desecrated, homes burned, civil rights taken away and secret lists compiled of Baha’is (and even Muslims who associate with them) by government agencies.

It’s bad right now for all the peace-loving Baha’is in Iran who want only to practice their religion and follow their beliefs. It’s especially bad for these seven. Here’s a link to their bios. They’re teachers, and engineers, and optometrists and social workers just like us.

This thought has become kind of a cliché’, but we take our rights for granted here in America. Imagine if a group of people were rounded up and imprisoned and then disappeared not for anything they’d done, but because they wanted to worship differently than the majority.

There is a resolution on the situation of the Baha’is in Iran being sent to Congress. Please ask your representatives to support it. And ask them to speak out about this terrible situation.

Thanks for reading. Now back to bears, paper and beets!